I was walking through Prospect Park near where I’m staying this month in Brooklyn. As I turned a corner, I spotted several small tents with American flag patterns: 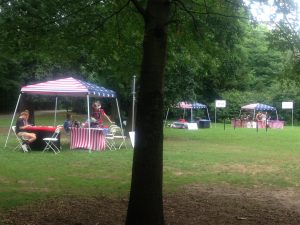 I thought to myself, oh god, it’s a Trump rally. I’d just volunteered for Hilary Clinton the night before…would that show on my face? With the news about Donald Trump’s comment that “the Second Amendment people” could do something about Clinton should she appoint a pro-gun control judge to the Supreme Court, concerns about nationalistic demonstrations hung clearly in my mind. New York is blue, New York City is bluer, and Brooklyn is nearly indigo, but with money moving into the boroughs, you never know.

I kept moving and saw crowds of people standing in a small clearing, with police officers nearby. I spoke to two of them, asking what was going on. “Captain America. It’s his 75th anniversary.” I moved closer to the milling group and saw young college students in platform heels and pigtails tied with the stars and stripes, little boys with shields and masks, and dads whose well-worn t-shirts could, at least on this day, be worn publicly without a rolled eye from their spouses. 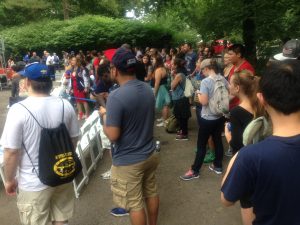 Nearly everyone was looking in the same direction, and I followed their gaze, to see this: 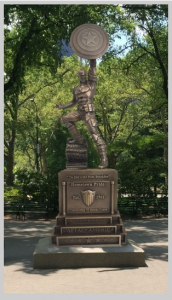 Evidently, some Brooklynites are unhappy with this installation (yes, it’s a real statue). Yet I was hugely relieved…and then saddened. How is it possible that over the years, the sight of the American flag plus congregants in open spaces has become menacing? It speaks to our times, our public discourse, our sense of belonging and fear intermingled in the same national identity. Am I American? Yes. Am I the American that people like Donald Trump and his followers say I should be, fighting to make our country “great” again and accepting the currency of intimidation and incitement of violence? I certainly hope not.

It’s an interesting question. A crude parallel can be made between this question and the question of bilingualism. Both enrich the host country (the former, the U.S. or any other literal receiving nation; the latter, the “host” of the speaker’s brain/cognitive function), both contribute various forms of diversity, benefitting the economy in the former case and one’s ability to think creatively and adapt to new situations (see here, here and here for examples of associated research), and both add resources in times of deficit and change.

But if you’re not connected to immigrants or a variety of languages through your work or your social environment, why should you care, really? The trope espoused by Donald Trump and others, that immigrants are here to steal work from and violate the native-born, has been soundly defeated by solid research over the years, and yet threads through an American consciousness increasingly clotted with fear and anger as powerlessness and disaffection rise. The brown people he indicts publicly in his displays of chest-beating become a fearsome enemy to be inspected for benefit, briefly, before the doors are shut and walls are built. Demographically overlapping at times though not synonymous with “immigrants,” speakers of languages other than English tend to be found in urban centers, far from the safe belts of White conservatives whose “authentic American” thinking is referred to as politicos and pundits haggle over issues like “political correctness” in critiquing decisions about gender-neutral bathrooms or trans-friendly policies.

In truth, the reasons why foreign-born participants in U.S. society are “valuable” can indict the interests particular to the person listing them. A video showing the fervent arguments of Michio Kaku, a professor of theoretical physics where I study at the Graduate Center in New York, is a case in point. Kaku asserts that foreign-born students benefit the science community in the United States, which struggles with the shoddy fodder provided by our intellectually deficient educational system (with, Kaku states, its rising “stupid index”), buoying up our economy as it is driven by Silicon Valley and other job creators in business. Importantly, the distinction between “immigrant” and “foreign-born” should be made (as it is unfortunately not in the blog post that inspired me to write). Nonetheless, this expresses the neoliberal ideology that defines how we perceive value and normalcy in education, business, and other human pursuits in the 21st century. The value of foreigners, says this viewpoint, is directly related to how they can contribute to our economy, to our ability to compete on the world stage with other major economic powers. Donald Trump himself could not disagree with this, as low-status Mexican workers helped him build major components of his empire. Thus, we can justify their presence here on such apolitical terms that allay American anxiety over the precarious hold we seem to have over our position as leader of the world in so many respects.

Is this what immigrants are good for? I can’t answer this question directly but must instead ask another: Would we suggest that our own children are valuable and “good” for the United States for the same reasons, e.g., their fitting into the puzzle of how to remain in our most assumed position of global economic power? What rings as a reductive stance for our innocent progeny seems somehow acceptable for adults who speak and look different from us coming to this country. Kaku may feel passionate about the need to challenge our ignorance of how we maintain global preeminence in science and technology, but his rather romanticized discussion still invokes a discourse that dehumanizes and constrains human potential, agency, and variety in an apolitical and logical course of events. Foreign-born people should not be commodified and sorted according to how much they keep us on top. Arguing from such a perspective reinforces the same neoliberal model in which atomization, dehumanization, and alienation have become commonplace and, worse, increasingly normal.

I’m reading a book entitled “Perspectives on Silence,” an oldie-but-goodie text on the various constructions, interpretations, and meanings of silence from various disciplinary perspectives. I’m very interested in this topic as it relates to my work on how research involving asymmetries of power influence the construction of knowledge, particularly in interviewing and survey-based data collection. Explorations of this topic by Miller (2010) and others update the conversation as it relates to adult immigrants, especially those who are not first-language speakers of English. Questions include, “How does a researcher’s position of power, in terms of cultural capital and linguistic capital, social class, race/ethnicity and senses of belonging, and symbolic status as a highly educated person, influence the way information is shared?” and “How does silence express more than a speaker’s pause to gather her thoughts?”

I spoke with some of my graduate students last night — all of whom are teachers in New York public schools — asking them about how they see silence in educational contexts. The response I got from several students, all raised and schooled in China, added dimension to the insights from the text. They stated that in their country’s schools, speaking in class, especially in order to challenge a teacher’s authority on a particular topic, was considered to be a sign of disrespect. Further, such a communicative move could open the speaker up to embarrassment and shaming. My students volunteered that even in group settings without an explicit authority figure, it was often the case that silence was a tacit offer of approval to a speaker, even though the listener might ask questions or contradict the speaker in private later. Such interesting ideas, and of course it begs questions relating to cultural difference, as well as how my students, as teachers, evaluated things like fluency or considered questions of personality, which in reality are very much culturally defined (case in point: many ESL teachers will say that Japanese and Korean students are “shy,” which is a self-contradicting comment…if they are all shy, then none of them are shy.)

These thoughts bring me back to my upcoming research, in which I work with adult immigrants who are “low-status” in terms of educational background, social class, language ability, race/ethnicity, gender, (dis)ability, and/or many other reasons, and how my participants could be silent in their interviews or their talk in focus groups. Perhaps I could even silence them in the ways I collect information, through question design and even the ways our socially-based power relationship plays out in a micro environment like a conversation in English. Such questions relate to the concept of interactional dynamics and speak to epistemological inconsistencies in research. Papers by Dodson and Schmalzbauer (2005) and Miller (2011) explore these topics and will shape my work as I move forward toward into the dissertation phase of my PhD. The real preoccupation is the political commitment to what lies beneath the work: to understanding that even the greatest of social crusaders can write over the stories of her participants through unequal power dynamics and assumptions about research participants who are poor, speak and think differently, and have different abilities and literacies than she does. 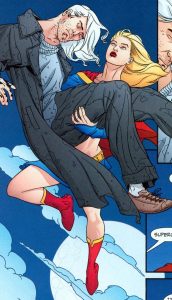