At Hunter College last week, I saw an installation which accompanied a dance performance taking place this fall on campus entitled Radical Bodies, which features the work of choreographer Anna Talprin. Halprin, whose experimental workshops took place on a beautiful outdoor stage, did work that “rejected the high style and codified technique of reigning modern-dance choreographers like Martha Graham in favor of improvisatory tasks and everyday activities.” (NYTimes, March 24, 2017) 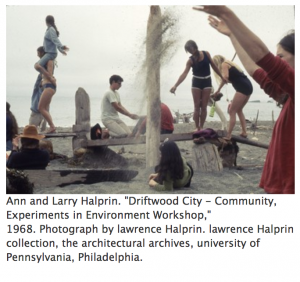 Many of these images are featured at Hunter College in the North Building, along with a description of the commitments to community building, embodiment and moral philosophy, and the search for authenticity through “self-generated creativity” (from Halprin’s Manual of Dance, 1921). Beautifully, and rightly, the Hunter description describes Halprin’s work as a radical pedagogy that speaks to the pain and struggle of the individual in the present era: isolation, homogenization, commodification, and standardization collude to obscure and trample on the stirrings of soul and unexplained, nascent, vicious little visions and vitalities we all have buried deep within us. 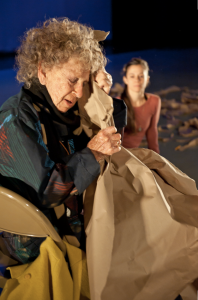 Halprin’s work resonates with John Dewey and other educational philosophers who explored the relationship between art and experience, and emphasized the importance of an education premised upon experience, of interacting with one’s world to create new meanings and emerge into a more fully developed self.

A beautiful proposal, indeed, one that is rare nowadays but not, thankfully, gone from our pasts, or our futures. 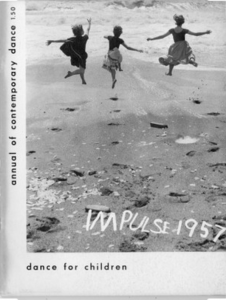 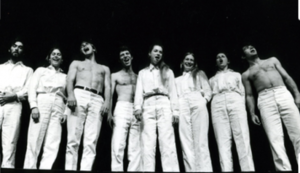 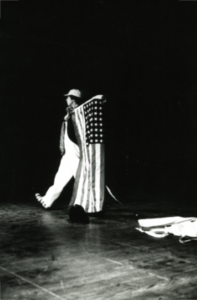 On Wednesday, Politico published an article about the opening statement I and other professors use on their syllabi at City College, Hunter College, and other CUNY campuses in New York. The statement, which I adopted in January 2017 and have included for all of my classes since, reads:

As an educator, I fully support the rights of undocumented students to an education and to live free from the fear of deportation. If you have any concerns in that regard, feel free to discuss them with me, and I will respect your wishes concerning confidentiality.

Furthermore, I am committed to making CUNY a sanctuary campus for undocumented immigrants, not just in word but in deed – through the campus community refusing to allow ICE to enter our campus and refusing to cooperate with and struggling to prevent any government attempts to ascertain the immigration status of members of our community or to detain or deport undocumented immigrants.

Since I included the statement – which I read aloud on the first day of every class – I have gotten strong, generally positive reactions from my students. In New York it’s common to have very diverse classrooms and conversations about racial, linguistic, gendered, and other types of difference include challenges to stereotypes and misconceptions about people of color, poor people, and transnational (immigrant) students and their families on a regular basis. Many of my students themselves are immigrants or from immigrant families, and many are directly impacted by the decision by Donald Trump to rescind DACA this week.

What I have loved about this statement since I included it is that it asks educators to think about what their role is in their classrooms and with their students. We should always be asking what being part of an educational community means, how we want to live and learn and teach in this community, and more than anything, how we define “community.” Including such a strong and unequivocal statement establishes an ethos of equity and safety in our classrooms, a space for learning where undocumented students could hear from their professors and know that while total protection can’t be guaranteed, their professors will stand up and fight to keep them safe, just as they would do for all students.

This equity view is very important, as is the desire to rehumanize a group of individuals which is typically homogenized and totalized as a social “issue.” I believe that we tend to take a charity view of this issue, talking about “these poor undocumented immigrants,” but the reality is, they also have positive, hopeful stories as well, hopes and plans like other students, and also regular human lives and experiences. They are regular people and not a statistic, as an undocumented student of mine over the summer reminded our class.

While this last thought was not included in the limited space of the Politico article, I am including it below. I speak of radical hope, and of remembering our history as a public university system, arguably the oldest in the country. It’s one I am very proud to be a part of as a student, an educator, a community member, and an ally:

I believe that collective activity which supports the idea of “sanctuary” as a co-authored political alternative to intimidation and fear is the only option we have. Sanctuary means acting in ways that actively resist and oppose terror. It means visibly and unequivocally protecting, valuing, and uniting behind undocumented students and colleagues as an expression of community. And I think an effect is that it means demanding that our country’s and city’s leaders refuse to support policies which are used to intimidate and divide our communities. To do anything else would be to turn our backs on our own history as well as our community members who need us now.  It’s a form of radical hope and it’s an honor to be a part of this now.

Hi Diana, I feel you, I know it’s scary…

Tonight I took part in a phone call last night held by United We Dream, a national organization fighting for social justice run by and for immigrant youth. Apparently over 2,000 people from all over the country including Virginia, North Carolina, Pennsylvania, New Jersey, and Oregon participated in the call, and the organizers fielded calls from immigrant youth and their supporters as they asked tough questions about the risks of going in for a renewal appointment, traveling, and other questions related to changes in their status. Information was shared, contact numbers and resources provided, and the silent host listening in shared in the communal response.

It was clear from the calls from DACA recipients, allies, and other community members that this is a difficult moment, human, messy, raw, and real. At one point a caller’s baby chirped in the background. Tears and anger choked the voices of both callers and the call leaders. Energetic and spiritual exchanges brought relief. We all breathed together as we experienced what this might mean for our families, our students, our community members. Two powerful themes emerged: uncertainty, and an absolutely unwillingness to stop and roll over. A beautiful, evocative phrase from one of the call organizers rang in my ears as I listened:

We are not defined by papers.

A White middle-class woman called and asked what she and other allies like her could do. The response was invigorating, earnest, assured. Allies need to continue to do what they’re doing. People with money and time to contribute need to call their representatives. Organizers need to be funded, which means organizations like United We Dream are welcoming donations. And trainings on how to stop deportations need to take place in local communities.

Our communities have fought way too hard to get us to this moment.

And my favorite quote of the evening, hollered together in joyful, unstoppable, hope: 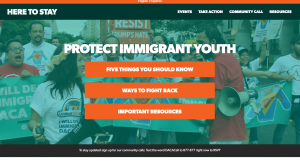