I’ve been watching episodes of “The Twilight Zone,” an old black-and-white TV series that ran from 1959 to 1964 and told weird, sometimes futuristic, often Kafkaesque tales that made the viewer twist uncomfortably or stare rapt in suspended horror at the screen. Unknown, mostly White male actors, limited and mundane sets (by today’s standards), oddly-rhythmed voices and dialogue make it a target for accusations of archaism and its fans of nostalgia, though I think going back to seeing work like this can reveal how little we really need in the way of effects and artifice to tell a good story, perhaps with a good point about humanity.

The episode I watched last night was entitled “Time Enough at Last” and told the story of a bank teller, Henry Bemis, an avid reader who was never able to find the time or the freedom to read. The plot is laid with the care and intention of Rod Serling’s trademark attention to detail, from a boss who threatens to fire Bemis if he can’t behave more like a professional and stop reading on his breaks, to a bullying wife who destroys Bemis’s book of modern poetry that Bemis tried to sneak out of the house. The plot takes a turn when a global disaster ensues: an H-bomb is dropped (while Bemis is in the bank vault, secretly reading on his lunch break), and Bemis emerges to be the last living person in the world. He wanders around, searching for others. He finds food, eats and sleeps. He laments, considers suicide…and then he discovers his salvation: the public library, broken apart like an Easter egg awaiting one such as he to plumb its trove of Shelley, Byron, Shakespeare, Keats, and thousands of others to be read year after year. As is typical, the episode ends with a surprise ending, and it leaves the viewer thinking. 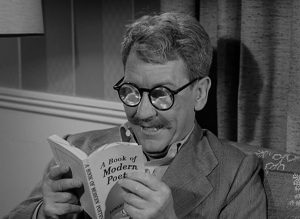 As I finished the episode, I reflected on the fact that so few people seem to be reading nowadays, especially literature but even just good old fashioned paper books. I scan the subway platform and the train cars on my way around the city, and at any given time, you can find anywhere from a third to over a half of the people around you staring at their phone. Are they reading? What are they reading? I have no proof of this, but from the quick snippets of flashing lights from Candy Crush and other games, TV episodes, videos, Facebook or Instagram feeds that I spy over shoulders, I am not persuaded that people are reading to learn on the train.

Does it matter? Is it my job, as a highly educated, highly privileged PhD student, to police people in how they spend their time? But I guess that’s my point: do we secretly feel that we’ll have plenty of time to learn, and find out something new, when we’re finished watching that last episode of whatever on Netflix or reading our friend’s updates (or blogs like this, for example)? Do we think we will have the time to get back to reading something inspiring, enlivening, frightening, which allows for our imagination to roam and range around, or are the screens somehow, secretly winning?

Too bad Rod Serling isn’t here to make a Twilight Episode about this. I’m sure he’d have a surprise ending for all of us.