On May 11th, PBS featured a fascinating story for its “Brief but Spectacular” segment that inspires thinking around (im)migration and identity. Jess X. Snow, a young first-generation Chinese-American artist illuminates her experiences as an immigrant, a child of immigrants, with force and insight:

Imagination is daring to love what is not in front of us. So what then, is immigration, if not imagination given a destination? 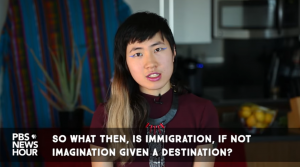 Jess describes the recounting of her family story as a young person with a stutter, an atypical way of being that produced unkind treatment by students around her. Jess found freedom in her poetry, in creating beauty in deep engagement with political philosophical questions related to what immigrant identity is under increasing surveillance as well as interrogating Westphalian notions of border drawing as “unnatural.” It’s not bravery that she exhibits, but rather honesty, loyalty to her family, her artistic community, and to her own vision, and the voice of a generation that asks important philosophical questions about political conservatism and nationalism through art and collective meaning-making.

Check out the artist’s work here.

A friend of mine wrote an article recently about an interesting phenomenon in the ubiquitous conversation about social media: the use of the Internet to access voice, subjectivity, and visibility in new virtual spaces. The article refers to a mildly ironic story of a Russian website, “Dvach,” which in the past has opened up space for misogynistic attacks by regular citizens on women who been in pornographic movies (no men were pursued in the witch hunt, I’m guessing), yet whose comment boards have recently given rise to a different, more socially progressive outcome. Evidently, a woman calling herself Yelena Ovechkina who lives in Kazakhstan posted a video on YouTube about her life as a real live PWD (person with a disability). She speaks to the camera during the video, stating “invalids are people, too.” The article wrapped up with an important idea:

Ovechkina says she loves the Internet, especially because it lets her reach out to fellow disabled people and learn more about their lives. But most of the information available about disabled people is depressing, she complains, and that’s why she decided to record videos about her own life, which she says is a happy one. “I want to show the other side of disabled people’s lives. After all, it’s not all lousy, hard, and sad,” she says, smiling.

The story is a poignant one about the ways in which public opinion shifts via the ticker tape of information on social media, as it translates into awareness of different ways of being. A single user on Dvach drew the attention of the other participants on the site to the video, and the connections made across the world included tributes and well-wishing. Of course one can comment that social psychology plays a hand; who hasn’t seen a Facebook post that they liked because they thought they should participate in some sort of ethical box-checking not unlike signing a yearbook in a certain way because you know others will see what you wrote (or didn’t)?

Still, the story is meaningful and important, not least because of Ovechkina’s comments about her life with disability. She is a real person with individual experiences in disability, someone who has subjectivity in her experiences and her ways of articulating them. It is easy to make assumptions about others as they are represented to us by media or by hearsay, something which is particularly complicated when we think about people who are depicted as the downtrodden, the lost, the pushed aside by society.

I experienced similar changes to my understanding when I wrote a blog as a graduate assistant at UMass Boston a few years ago. Every week, I posted about different topics regarding inclusion in the workplace, as well as the community(ies) who participate in the conversation about disability in society. A powerful shift in my own thinking came gradually, as I realized that it’s one thing to post on/about and another to dialogue with ideas and people, and that positionality is central to the construction of truth in the public space. Did I think I speak for people with disabilities? Did I choose to represent them, and if so, who was I to do so? How did my representations contribute to (mis)information, and how could I be more interested in acting as a moderator or facilitator than simply a conveyer of a version of truth that kept me in a posture of authority while the people I was writing about were simply my latest subject?

An example of alternative authority and subjectivity in such speech is called Autistic Hoya, an eponymous blog written by a young person who identifies as “queer, trans*, asexual, fat, disability, gender, and sex positive; anti-oppression, anti-imperialism, and anti-racist; and inclusive of, accessible to, and affirming of all bodies/minds.” Autistic Hoya has published since 2011 on a number of topics related to a critical view of dominant paradigms, forces of oppression, and injustice enacted through ableism in American society. Yet also, the blog, like Ovechkina’s YouTube video, expresses the real voice and real face of a real person with disabilities. It is not seeking pity or attention. It is speaking to express one lived experience in a shared space where norms are highly dynamic and ideas pop and splash constantly.

This is the remaking of power relations and definitions through access on a new stage to an audience that didn’t know it wasn’t listening. Attending to this construction of meaning in fluid spaces of sharing and dialogue demands that the self-righteous banner of saviorism be lowered and real action, through listening and interrogating assumptions, become possible. While we in the able, dominant groups believe we have a mission, it may not be one which includes the voices and leaders it should truly have. 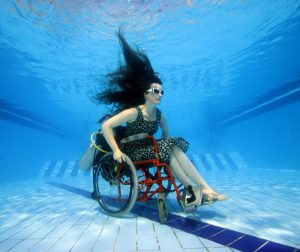