My professors at the Graduate Center tell me that my work as a scholar and a new professor — I work as an adjunct at two colleges in the CUNY system — is a process of socialization, one which involves me becoming a professor as I learn, experience, and grow by doing. I love this idea. I think it speaks to what is most true about learning: that it is personal, meaningful but differently so according to where and who we each are, and transformative.

Tonight, my students showed me this, yet again. It’s been a fantastic class and a blessing in my life, one which I look forward to every week. Our last meeting tonight was a sad one for me, and I thanked them for everything the course has meant and all the great work they’ve done, as well the community we’ve built together. I handed out Self-Evaluation forms for my students to complete, as a means of reflecting on the semester and pulling together the ideas we’re taking away from class. Reading them on the way home, one comment struck me, and made me realize how far we’d all come together:

I always thought that the highest compliment a teacher could receive was, “I loved this class” or “My teacher was the best.”

I teach a class about emergent bilinguals and bilingual education in the United States. This week, we’re talking about what constitutes a “successful” program, a highly polemical topic stemming from Civil Rights Era-challenges to the status quo, though the debate about the official language of America and what language to school our children in has origins in the earliest days of the republic. We’re exploring how — and whose — decision-making determines programming for students who are English Language Learners (ELLs), drawing from empirical study, learning theory, and experiences in different schools across the country. One of our readings for class, Successful Bilingual Schools: Six Effective Programs in California, documented “successes” in spite of challenges relating to funding, political opposition to bilingual education, and the ubiquitous pressures to compete, be accountable, and prepare for future job opportunities which can often shackle schooling to the leg of capitalistic destiny-making.

A question I often ask — and did in class last night — is, who is the expert in this conversation? Whose words and experience carry more weight, and why? It’s often the case that expertise comes with many letters after one’s name, conferring value through years of study and research, as well as official titles like “Secretary of _______________” or “Director of _______________.” But for those of us seeking to reach such generally unchallenged heights of expertise, the truth must always be maintained: we can’t know what happens in all given schools, for all children and parents and teachers, within all communities. An obvious statement, to be sure, but the point our class came to last night is important: Local context matters. Student voice and choice matter. What happens in a New York City French-English bilingual program may simply be implausible in Lubbock, Texas, for reasons ranging from resources to political will to community views of language use to geography.

A complicating issue is how we, as progressive thinkers in education, involve students’ communities, especially their parents, in the conversation about bilingual education. This is an asset view of students’ cultural knowledge, arguing that their family backgrounds, cultural knowledges and practices, and community histories inform their ways of experiencing and making meaning through schooling. I struggle with the asset view at times, because it’s a theory that often meets resistance on political and economic grounds. Many parents are often unable to participate more as they are pushed away, outside, beyond the walls of a school by prejudice or struggle with pressures to earn money and work harder to support their family. Some schools think they are including parents in decision-making when in reality, they are simply dictating what parents’ behavior should be. Other parents feel that this is exactly what schools should do: make all the decisions and manage their kids for 7-8 hours per day. Another issue stems from beliefs about rightness in language use. Is it a service provided to “low-status” families to help them assimilate, or a process of enrichment like a foreign language, or else the building of political opportunity and ability to participate in civic engagement?

Schooling in general is complicated, and it is experts that are invited to weigh in on what is best for our nation’s youth. Yet I’m glad that we finished the class last night with the question far from resolved. I emphasize the power that teachers, educational scholars, and policy makers have over others, a power that is too often underproblematized outside and even within the academy. Our ability to tell someone, “Yes, this is right” is historically determined and therefore contingent. While we can argue we have years of expertise, we don’t live the life of our students, and the portal via which we attempt to see in — empirical study — is fraught with complications that include bias, silencing, and misinterpretation. The posture of inquiry and uncertainty, uncomfortable though it may be, is an important one given the risk of replicating injustices past. Considering the current state of affairs when it comes to racial achievement gaps or disparities in educational outcomes for ELLs compared to American-born children, we clearly need to be asking why all of our highly-paid experts haven’t resolved these problems yet.

Students who are first-language speakers of a language other than English are, in America, categorized as English Language Learners, or ELLs, and our country’s history of working with these learners has been complicated and politically fraught. Oftentimes, references to federal decisions such the landmark Supreme Court case Lau v. Nichols in 1974 or state-level legislation such as California’s Proposition 227 in 1998 come into the conversation as markers of the pendulum that swings between conservative and progressive viewpoints. The former view tends to advocate for an assimilation-minded view favoring transitioning students into the mainstream classroom as quickly as possible, in which ELLs’ home language is seen as a barrier to academic, social, and economic opportunity (and, in earlier times, a form of deviance deserving of shaming and punishment). The latter, in contrast, asserts that ELLs’ home language is a cultural resource and a dimension of their identities which must be incorporated as a necessary dimension of equitable and ethical education.

Sometimes, through all of these important and lofty ideas, the actual local experience of a learner can get lost. We in academia argue passionately about what Paulo Freire would say, how Gloria Anzaldúa expressed this struggle to self-identify as a linguistic being in the face of intersecting, possessing forces, what Ofelia García argues is the politically committed way of thinking about the education of linguistically non-dominant learners…yet the imagination can get bound up with constructs and move away from lived experience.

I found a short movie today that brings this lived experience, different for every learner, into focus for overthinkers in the ivory tower. The movie, called “Immersion,” tells the story of Moises, a young Spanish-speaking boy who struggles to navigate education in an English-only classroom, in modest yet potent tones. The 12-odd minutes are worth the reconnection to the complex and fragile,”every-child-USA” narrative told through his eyes. (For more information on the movie and how to get involved, check out the website at http://www.immersionfilm.com/.) 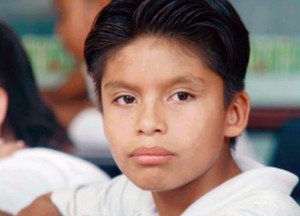