Going to protest the possibility that Betsy Devos could become the Secretary of Education of this country tomorrow at BMCC in lower Manhattan. Watch her avoid responding substantively to any questions about equal protections for all students who have disabilities, who suffer bullying, who take out student loans, who are taken advantage of by for-profit career colleges. 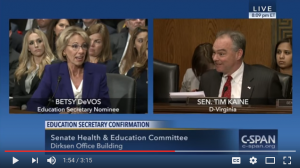 Here are some of the reasons why I’m demonstrating tomorrow:
I love this last exchange in the first video:
Hassan: “I would urge you to become familiar, should you be nominated, with the Individuals with Disabilities in Education Act, and I do have to say, I’m concerned that you seem so unfamiliar with it, and that you seem to support voucher schools that have not honored, you know, have made students sign away their rights to make sure that the law is enforced. That’s very troubling to me.”
Devos: “Senator, I assure you that I, if confirmed, I will be very sensitive to the needs of special needs students and the policies surrounding that.”
Hassan: “And with all due respect, it’s not about sensitivity, although that helps. It’s about being willing to enforce the law to make sure that my child and every child has the same access to public education, high-quality public education, and the reality is that the way that the voucher systems that you have supported work don’t always come out that way…”
Sen. Maggie Hassan (D-NH) https://www.youtube.com/watch?v=fftskn5HFdA
Sen. Al Franken (D-MN) https://www.youtube.com/watch?v=hMRX_21Le6I
Sen. Kaine (D-VA) https://www.youtube.com/watch?v=4kJb1wXCxfo

A friend of mine shared a video of an interview between Gad Saad and Michael Rechtenwald, a professor at NYU who evidently has been “castigated for daring to criticize safe spaces and related thought policing, postmodernism, literary Darwinism, secularism in science, and the relationship between science and religion.” I’m including the video link here (I’d suggest watching 24:00-28:00ish) as well as my comments on YouTube. The point: The two speakers are hashing out the “bullshit” involved in postmodernism and the work of thinkers like Michel Foucault, Judith Butler, and other poststructural scholars, stating that these thinkers are obscurantist and concern themselves with sounding intellectual rather than making salient and socially applicable points. What do you think?

The two speakers are aiming to be critics, which I can appreciate. However, to say simply that Butler is “full of shit” is to ignore her contributions to scholarly thought, which are valuable. She’s an important philosopher of language. One of the issues I think they’re conflating is the idea with the mode of expression. I agree that Butler’s sentence is abstruse and very very difficult to understand (weirdly, I understood it for the most part!) but I don’t think we should throw the baby out with the bathwater. I’d look for a middle ground where we can still find ideas and assume that scholarly work can be exploratory and push the reader to think, even if at times it is hard to read.

I agree with the speaker on the left that literary/critical theory is often worshipped for the lofty and inaccessible (obscurantist) ways of speaking. For example, Derrida wrote a dissertation that was widely rejected for its meaninglessness. I read Derrida’s work for about 50 pages and it occurred to me that he could have said what he wanted to say in 5-6 pages. However, I think it’s facile to call it “bullshit” or a “false prophecy.” I agree with the gentleman on the right that literary/critical theory at times divorced itself from social reality…however, again, I think this is a reaction to the rock star-ness of French intellectualism in the 1960s and its social excesses and doesn’t justify a perspective that none of it contributes anything to scholarship and creative ways of resolving philosophical and political questions in society.

The moral of this story: READ FOR YOURSELF. We are in anti-intellectual times when we count on pundits to tell us how we feel. This temptation for the shorthand version of things is to be avoided at all costs.