Last night I watched Won’t You Be My Neighbor?, a biopic about the life and work of Fred Rogers, a Presbyterian minister and TV personality known to people of my generation as the host of PBS show Mr. Rogers’ Neighborhood. Rogers donned his iconic cardigan sweaters and talked to the audience through the camera in every episode, welcoming children into his world of puppets, imagination, music, and conversation about being a kid and being human. Along with Sesame Street, this was my earliest memory of television, and, after remembering this experience through the movie last night, a precious one. 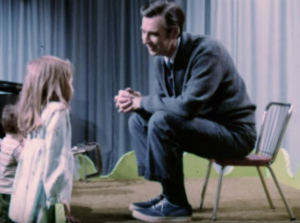 Screenshot from Won’t You Be My Neighbor? (Focus Films, 2018)

I didn’t realize how intentional the work of Fred Rogers was, in terms of his commitments to children and their development, as well as to helping them understand a confusing, sometimes cruel world, as well as their feelings and reactions to it. Rogers believed that children should feel as though they were special just as they are, and that a neighborhood, as he framed his show and its unifying theme, should be a place where you feel welcome, and safe, and accepted. This posture was affectionately termed “radical” by some of the team that supported his work, and indeed it continues to be today. Indeed, in public schools, we define “specialness” according to test results, conformist behavior, and eyes-on-the-prize thinking which make the experience of being a young learner a question of educational management rather than exploration, contestation, and becoming oneself at one’s own pace. Some of these tensions have existed in schooling for generations (see critiques here, here, and here), to be sure, but the pervasion – perversion? – of neoliberal values in our schools has changed education in the United States fundamentally, if not irrevocably.

Rogers, who died in 2003, held the unshakeable perspective that children should be guided by adults in approaching the world in safety, reassured that the grown-ups would take care of them, and that each the way each person, young or old, experienced this world was valuable and important. A beautiful quote from Rogers is as follows:

Love is at the root of everything, all learning, all parenting, all relationships. Love or the lack of it.

A beautiful and moving idea, one which the filmmakers suggest was rooted in Rogers’ faith. It was with this ethos in mind that he explored topics related to the Vietnam War, racism and segregation, the assassination of Robert Kennedy, and, much more recently, 9/11.

Interestingly, Rogers was a lifelong Republican, which makes me wonder how he might respond to our current cultural and political environment. While a living expression of the deep power of care and commitment to one’s fellow human, he was, like all of us, a limited individual with his own experiences and commitments upon which he built his world. This made me wonder how he might address, or even think about, the recent stories that have emerged in the news about immigrant parents being separated from their children at the U.S.-Mexico border, which Attorney General Jeff Sessions defended using a now-critiqued citation of the Bible. Rogers might well have spoken out against this blatant cruelty, trauma, and violence being inflicted on families and children, some of whom are toddlers, and called upon the U.S. government to consider the lasting impacts these actions would have on the young people who are taken from their parents, put in detention, and relocated to foster families or relatives’ care. Yet I also wonder: would Rogers’ political conservatism generated complication and controversy for him?

To be clear, I’m not suggesting that Rogers would have thought these terrible events excusable or even tolerable. I suspect he would have been appalled. Yet I can’t help but suspect that this would be complicated for him, like all of us. Would he, like many of the members of our society today, feel even slightly differently were these U.S.-born children, especially White, English-speaking children?

My point is this: Even if a person believes that they are doing good in the world, their political alliances and the narratives that support them condition their way of enacting this good. It is, ironically, this reason that supports the rise of the testing regime in this country as a means to avoid leaving any child behind. The creators and users of these tests truly believe they are helping our children. And the nativists and White chauvinists in power today truly feel that they are protecting their country. We can love, and we all should do our best to do so as inspired by Fred Rogers’ life and work, but we also must remember that to love does not mean to love blindly, universally, or without tradeoffs.