Being a student in one of the two largest public university systems in the country is an amazing experience. CUNY is powerfully connected to its complicated history with New York City, and there are few people who are not proud to study or teach there (or both, as many of our graduates continue on as professors at one of our campuses across the five boroughs). This history is activated in our collective actions as we stand alongside immigrant rights activists in downtown Manhattan, fellow demonstrating students fighting for the right to unionize, our masters students whose tuitions may rise in top-down decisions from school leadership, and many others.

Last week, I encountered two examples of how public institutions of higher education generate the centripetal forces that pull people from our communities together to fight for a common cause, like gentrification, unfair housing policy,  our city’s role as a sanctuary, and, like these two examples, the policing of Black and Brown communities which has terrorized families, perpetuated fear and anxiety, and resulted in the senseless death of far too many people. The first was a station set up on 5th Avenue with an information booth and colorful signs draped down its sides. It had been set up by the New York Civil Liberties Union.When I asked what was happening, one of the organizers told me that the signs were actually stickers that people could pull off and attach to a postcard that would then be mailed to the mayor’s office to articulate the community’s concerns about policing in New York and how it could be changed in the name of a more just system. Below is the flier the NYCLU provided with the same images: 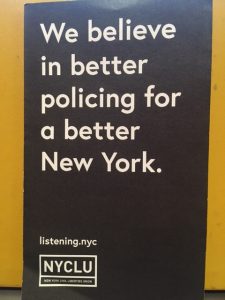 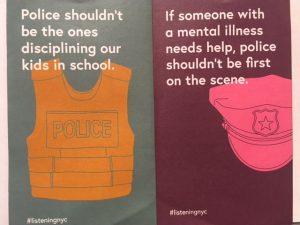 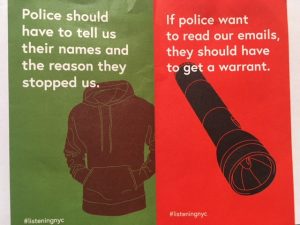 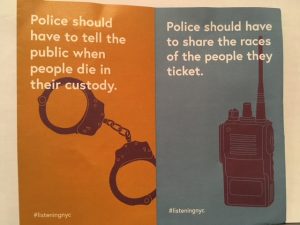 I made my choices, added my postcard to the pile, and thanked the organizers doing this great visible-izing work in an area where they knew they’d get good support: CUNY students, professors, staff, and community members.

The second example of these amazing community forces flowing through CUNY showed up in a flier I found inside our building, one of hundreds that paper our hallways and bulletin boards: 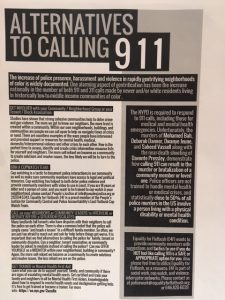 A plain-language discussion of how gentrification and institutional racism are reinforced by police profiling of communities of color, the flier offers real solutions, resources, and contact information for all of us to become a part of community-based change by building relationships between residents, joining cop-watch teams, seeking mediation, and getting information on how to provide first aid.

These texts are living, continuing a dialogue in which we speak truth to power and give care to each other. So proud to be a part of this place.

In the fourth year of doing a PhD, different people come up into, and against, different feelings. Some become more invigorated, generating an ever-so-slight fullness of smile, a growing sense of purpose, of voice. Others seem bogged down, sagging under the weight of hours staring at one’s silly words, uncertain that anything will ever come of all of this fuss and pennilessness. Still others — many of us, myself included — traverse the space between these two poles, sometimes full up with both feelings and plenty more besides (like loneliness, acid reflux, 3rd-grader-ish pride, shoulder pain, delight at being in limbo and relatively unaccountable, unresolved desire for unspoken engagements, and so on). It’s an ambiguous, profound, alien time, much like childhood, in that no one can really track where you’re headed, as you stumble and clamor and climb up trees and over hills.

I attended a student working group with my advisor and several other of her advisees tonight. One of the group members presented his work, terrific research on social workers and the tension between their values and the structural and political realities that constrain and delimit ethical engagement with their practice. During the talk, the presenter offered the Russian word sobytie, which he translated to mean “event,” and connected it to the work of Mikhail Bakhtin, philosopher of language and literary critic. Our advisor, who is from the former Soviet Union, offered more information about the word, stating that its literal meaning is “event,” yet it can be broken down into the elements so, meaning “co-,” and bytie, meaning “being,” and that “co-being” in Russian means that one’s existence is a shared ongoing experience. She explained that there are many Russian words like this, which begin with the prefix so, thus embedding the idea that communalism is a fundamental part of being human. An illuminating example of the fact that language can contain so much history, so much social vision, in a single word.

As a PhD student, it often feels that our “co-being” is diminished, as we tell our friends and family (and ourselves) that we’ll have to talk later because this paper is due or a presentation is impending. We are lonely, but we know it’s a loneliness that is relatively temporary (only 5-8 years or so) and in fact is required to discover the trees and hills we want to climb. I also think, though, that there is something transformative about this solitary life. It is a life of learning, and one where the companionship that bubbles up along the way features sharing of brilliant, thrilling dialogues and the hardest questions you’ve ever faced. Bohemian-Austrian Romantic Rainer Maria Rilke encapsulates this beautifully:

I want to be with those who know secret things or else alone. 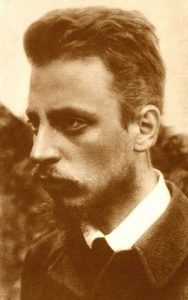 This is a comforting notion. It’s a bit extreme, I’ll admit — there are people I care very much about who are not on a quest to chart unseen worlds or pen unwritten words — but I like the idea of companionship in the tender, sometime darkly-lit explorations we do as doctoral students. It makes the mental calluses, the hiccuping sleep, the yawning uncertainty of the future, seem a bit more tolerable. It reminds us that exploring is a good way to make a life. 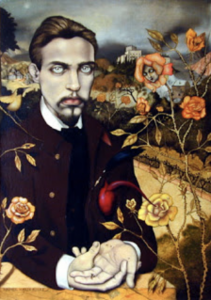