Hurricane Harvey is striking Houston and 50 other counties in Texas, pounding the region with enough water to fill the football stadiums of the NFL and all colleges across the country 100 times. Nearly impossible to imagine. At the same time, one-third of Bangladesh is under water in a monsoon season that has been strongly augmented by climate change (also called climate chaos or climate disruption). Both disasters, the latter of which has led to the deaths of over 1,000 people thus far, relate to the larger issue of the abuse of the environment that we as a species have undertaken for profit.

Coincidentally, President Trump is under pressure to end the DACA program in the United States, threatened by impending lawsuits from a cadre of Republican lawmakers across the country. DACA, also known as Deferred Action for Childhood Arrivals, is an Obama-era program for amnesty which provides the opportunity for immigrants who came to the United States illegally as minors to work, live, and participate in society without the threat of deportation. About 750,000 individuals in the United States benefit from this program, which has historically been a controversial one but has emerged as a polarizing issue since the 2016 election. Trump’s leadership on Muslim travel bans and the pardoning of Arizona sheriff Joe Arpaio, who profiled immigrants and maintained a detainee “concentration camp,” have revealed our president’s quest for popularity with his conservative, nationalistic base through nativist, Anglocentric, xenophobic speechifying backed up by executive action and regional actions like SB4 in Texas.

The connection between climate change and the marginalization of immigrants and other people of color and poor people is powerful. Hurricane Harvey exemplifies the devastating impact natural disasters (if this term really applies) have on communities of color and poor communities, including immigrants who are undocumented, constituting a clear form of environmental racism that is often accepted under the logics of deregulation and capitalistic expansion. As Harvey’s destructive consequences reveal themselves, reports state that many undocumented immigrants are not contacting authorities for help during the disaster, producing widespread health, safety, and economic concerns. Even when people are able to return to their homes and begin to rebuild their communities, they will need to work to make up their losses, to continue their lives, and, unfortunately, to prepare for disasters that surely will come in the future.

However, if DACA is ended, its 85,000 beneficiaries who live in Houston will be left without the possibility of doing just this. Immigrants activists like Cesar Espinoza, an undocumented immigrant and guest on Democracy Now! this morning, speak of his community as it responds to these questions. “The fight continues,” Espinoza says:

For a lot of people, though, it’s a piece of devastating news. They’re relying on their deferred action, on their ability to work, so that they can rebuild, they can go back to work, and help their families rebuild their lives. Unfortunately, if DACA does get rescinded in the next couple of days, these young men and women are going to be left with nothing, the rug is going to be swept from under their feet, and who knows how long it will take for them to rebuild. 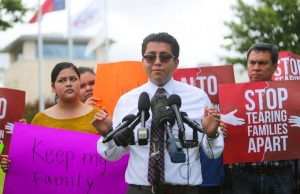 Image from the Houston Chronicle

Community is where the strength to face such possibilities comes from. The question is, who belongs to this community? Who should be responsible for the fall into, and struggle out of new and continued poverty, housing instability, health complications, and other problems that members of Houston’s incredibly diverse community will face? The answer is, all of Houston, and all of our country, should be. Undocumented immigrants are a part of all of our communities, and should be valued as contributing members with the same concerns other residents have. We all share the same civil rights to life, to live without discrimination, to the ability to participate freely in society and build a life with self-determination and dignity. Climate disasters reveal that our thinking is not there yet. But we still have time to reconsider the political and social disasters to come if we don’t.