Sunday, May 6th was Mother’s Day. One of the movements that has drawn my attention and respect is the movement to bail out poor Black mothers from jail, where they stay for weeks, months or longer simply because they cannot make pay the cash bail set for them. This year was the third year that “Black Mama’s Bail Out Day” took place, occurring as a week of events to draw public attention to this injustice. Importantly, activists use a broader definition of “mother” which moves away from the bio-normative concept of care-giving. According to Arissa Hall, project director of National Bail Out collective:

We’re talking about more than just birth mothers: caregivers, queer mamas, and the people responsible for taking care of our families and communities.

Keeping over 500,000 of the caregivers in White, middle- and upper-class communities in jail would be unthinkable. Yet in the case of Black communities, particularly those who are poor, this appears inevitable under the rubric of infectious late-stage capitalism (which is also a racial[ized] capitalism), where Brown and Black bodies are regulated, violated, and consumed.

In a Democracy Now! interview with Mary Hooks, co-director of Southerners On New Ground (SONG), Amy Goodman asked Hooks about the contributions that wealthy donors, including celebrities like Kim Kardashian, make to activist projects like Black Mama’s Bail Out Day. Hooks rightly refocused the lens on the work of longtime committed contributors at the local level, but gave a nod to Kardashian:

…[A] shoutout to Kim for continuing to cash in her white privilege to do what must be done for the sake of other folks’ liberation. Efforts like that should continue to happen, and we should see other entertainers and celebrities get up under grassroots movements and the work that’s being led by black women, queer and trans people to free our people.

This phrase, “cashing in on one’s privilege,” struck me as I reflected on my work in immigrant rights activism with New Sanctuary Coalition. Those of us who are U.S.-born have powerful advantages in this society. Our citizenship privilege is that of people who have the right to reside in a place without fear of being sent far away, the right to live without constant anxiety that our doors will be knocked down and our children dragged out in front of us, the right to labor protections, the right to speak out against injustices enacted against us.

We need to cash in on this privilege of citizenship, see the power that we have and advance against the forces of White supremacy and nationalist violence alongside our undocumented neighbors. Sure, you can catch me out on the contradiction between my critique of capitalism and my use of a market-y metaphor, but the point stands. Those of us with the power, the privilege, have to get the lead out.

Something that has gotten little attention in the news lately is the fact that under discussion is the merging of the U.S. Department of Labor and the Department of Education at the federal level, a conversation that was apparently inspired by businesswoman and First Daughter Ivanka Trump. The fact that this momentous change is under consideration is understandably obscured by current news about the separation of asylum-seeking migrant parents and their children at the Mexican-U.S. border, which results in illegal incarceration, trauma, and the destruction of family units. Important to our thinking is the consciousness that this seemingly recent stage of of politics which is drawing our attention (and, perhaps, morbidly creating an opportunity for broad, ecumenical, supra-political unity on what amounts to violence and abuse) is in reality part of a much longer history of dehumanization of immigrants coming to this country seeking work, succor, or opportunity.

According to CNN, the proposed merger is part of a major government overhaul, which Secretary of Education Betsy Devos claims to be a means by which to “reduce the federal footprint in education and to make the federal government more efficient and effective.” As Devos has argued publicly since her appointment in early 2017, states and individual municipalities should have control over what happens in their schools, overlooking the fact that the federal government continues to exert influence through funding policies as well as constitutional protections of student’s civil rights, including protection against discrimination (see here, here, here , and here for more information about this ongoing tension). 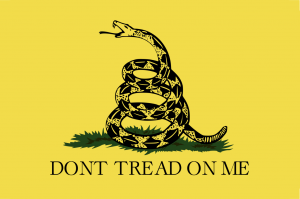 White House budget director Mick Mulvaney stated that this merger “makes tremendous sense. Because what are [these departments] both doing? They’re doing the same thing. They’re trying to get people ready for the workforce. Sometimes it’s education. Sometimes it’s vocational training.” Essentially, Mulvaney is articulating a shift that has been taking place in educational thinking in our country over the last several decades, a progression which included Ronald Reagan’s pledge in 1981 to eliminate the Department of Education in a time when “big government” received increasing criticism. Reagan’s pledge, unfulfilled though it remained, referenced his and other conservatives’ ongoing push to make education a process of job training, a position illustrated in his public speeches in the 1960s in which he argued that “taxpayers shouldn’t be subsidizing intellectual curiosity.” (That Reagan was a mediocre student and didn’t seem to care about his own schooling is perhaps a separate conversation.)

Two questions to address are these: how are we defining schooling, and how are we defining education? What is the purpose? Yes, schooling prepares us to emerge into and participate in the adult world, but this is so much more than work. True, we have moved through different eras of educational approach and philosophy, ranging from Taylorism (a.k.a. industrial education or a factory model of education) to John Dewey’s view of education as a laboratory for democratic thought and exploration. We have employed schooling to serve political as well as economic purposes, as a buttress against perceived threats of nuclear war and a preemptive strike against losing our place as a world superpower. There has never been a single unified vision of what schools should do,  how teachers should teach, or how children best learn. I would suggest that healthy and impassioned debate about this should continue on as long as schools exist.

Instead, I hold and hope that education itself – not schooling, that embattled and ever-changing space where children adopt ways of thinking that adults approve of (yes, this is a radical stance, but not necessarily a leftist one!) – can survive the neoliberal, market-friendly restructuring that threatens from the highest office. Education is the means by which we encounter – note, not “become” – our thinking selves, our feeling and knowing selves. We explore abilities, take chances, find heroes, start fires, and trip and swing and, damn it, learn. Grow. I take a radical view in stating that I believe that education takes place in many places and spaces: at home, in religious centers, with siblings and grandparents, on playgrounds, when we travel, when we suffer loss. Schools may purport to act as a locus for such experiences, which urge excitement of the mind into spaces of new becomings, but it is education itself that accompanies all of us as we become our human selves and grow into possibilities.

These possibilities may include ways of participating in work, but they also include ways of participating in society as democratic subjects and human beings living together in a shared political community. If we reduce education to job training, they we lose the opportunity to explore and understand so much about our reality. We begin to accept our current state of affairs as what is “right,” “normal,” and “unavoidable.” We begin to lose sight of the fact that this time is only one of many shimmering off the back of collective humanity. And in a time of great pain, anger, fear, and abandonment, we cannot afford to go blind.

Yesterday I was walking in my neighborhood along a path that includes a beautiful cemetery with winding paths and lovely bent old trees. A cheerful orange-and-black clad woman greeted me from her seat at a welcome table as I walked up to the gates. “What’s happening today?” I asked, as kids in Spiderman and gorilla costumes milled around beyond the entrance. She grinned widely and replied that this was Trunk or Treat, an event for Halloween that families participate in across the country. 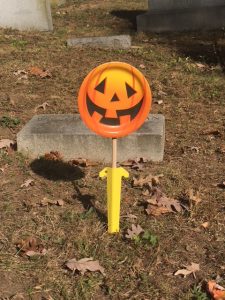 Why am I posting about this, when I write about education, democracy, social justice, and other topics more directly related to my PhD and my work in community? Because my previous post, “Time Enough at Last: screens and the elusive book,” brought up the way our google-eyed preoccupation with screens in public spaces can replace basic human activities, like reading, making small talk, or just gazing around and taking things in. Because I guess I’m wondering about humanity at a moment when it is being questioned by political uncertainty, social anxiety, and the widespread and pervasive influence of technology on our lives and our ways of seeing ourselves and each other.

The Trunk or Treat I visited yesterday heartened me, reminding me that we have choices, we have community, we have beautiful and silly customs that bring us together. Sure, accuse me of nostalgia, of being a Luddite, but don’t overlook the fact that my restlessness (and hopefulness) stems from an itching for human contact in spontaneous, unmonitored, unfettered ways that feels like it’s becoming rare. 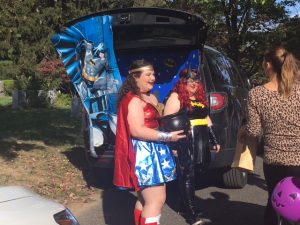 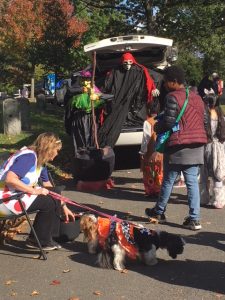 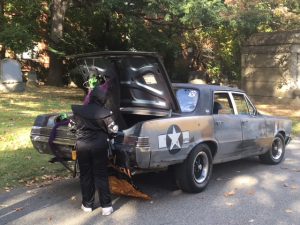 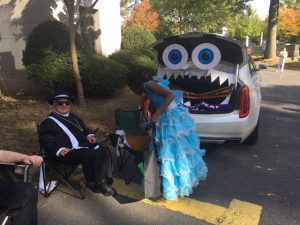