A few months ago, I saw this poster on the New York subway, part of an art initiative which I generally embrace: 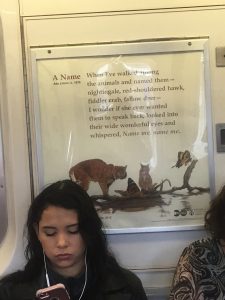 The poem “A Name” was written by Ada Limón, a Californian poet whose work is featured in feminist collections and conferences. This is the text:

When Eve walked among
the animals and named them—
nightingale, red-shouldered hawk,
fiddler crab, fallow deer—
I wonder if she ever wanted
them to speak back, looked into
their wide wonderful eyes and
whispered, Name me, name me.

When I saw this poem, I chewed on it in my mind for a few minutes…and found myself annoyed. The imagery is beautiful, antediluvian and resonant, to be sure, the natural landscape and the delicate articulation of action of a first woman in the new world, naming animals. But at the end of the poem, Eve longs to be named by the animals…Why? Why does she need to be named? Her name was Eve.

Would Adam have walked with the same uncertainty about himself and his identity? Highly doubtful. And were he to have asked for a name, he would not have whispered.

I find myself increasingly resistant to the creation and perpetuation of spaces in which women maintain a position of mystery, a membership in the natural world that exoticizes them. We cannot recognize ourselves; we are meant to be recognized by those (people or animals) around us in such romanticized thinking.

I much prefer the stories I’ve been reading lately in a book called “Tatterhood: Feminist Folktales from Around the World” by Ethel Johnston Phelps: 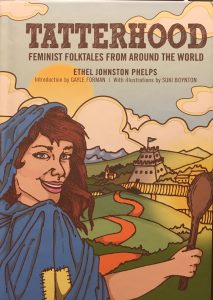 I got the book at a radical leftist bookstore called Bluestockings on the Lower East Side of Manhattan, a volunteer-run spot with free talks and great spontaneous conversation that pops up over new and revisited ideas in a world desperately in need of face-to-face dialogue. “Tatterhood” is wonderful, including old and new fairy tales from Japan, Scotland, South Africa, Scandinavia, and Native America. I’m a big fan of fairy tales in general, but one of my struggles is always the classical depiction of women as “awaiting their prince,” “passive,” “beautiful,” “feminine” (whatever this term really means), and other features which all of us have heard as a critique of these great old stories.

I will always love fairy tales, and I’m glad to add “Tatterhood” to the list. The female characters are adventurers, sometime-wives and family members, or sometimes lone, joyful explorers of the world. Theirs are full(er) characters, who are not simply upending the patriarchy but rather living on different terms. Consequently, they embody more of a science fiction voice in response to gender norms, but because of their age (some are from the 19th century or earlier), questions emerge as to why they were not made more popular.

My only complaint: the title. It should — and hopefully will, one day — just be “Tatterhood: Folktales from Around the World.” One day.