I love to vote. Some people find the process tedious, full of long lines and old-fashioned procedures involving paper and bubble-filling, but I love going to my local school, finding my council and assembly district, signing my name in exchange for the ballot in its huge long sleeve, and heading over to the area where I make my choices as a citizen. Not only do I get to participate in civic life in an active, direct way, I also get to say hello to neighbors I never otherwise would have met. 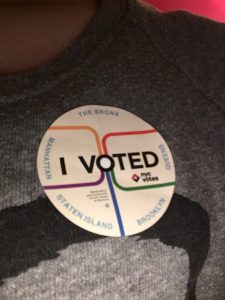 In a bizarre twist, I ran into my choice for mayor in person on the Upper West Side only three hours later. 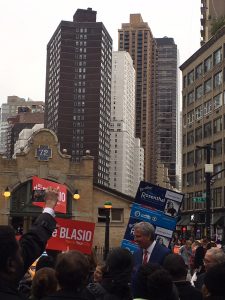 It was definitely a what-are-the-odds type of situation and reminded me that being a New Yorker, for all of its stress and expense, also means being on the streets, on the subway, in shops and parks together. Lots of people hovered around De Blasio, a few hollered obscenities, but most just looked on peacefully as the incumbent shook hands and engaged in last-minute connection with the public.

On my way to the library to study, I gazed over my subway car and enjoyed the sight. Being in New York means being with people. There’s plenty to struggle against – including attempts to eradicate our city’s status as a sanctuary city, the pressure to privatize more and more schools, housing injustice and gentrification, complicated issues with policing and its history of racial profiling, not to mention my personal gripe with all the screens clogging up out attention spans – but at the same time, we’re all still human beings, getting from one place to another…together. 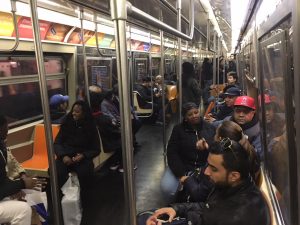