I’ve been obsessed with hip hop videos since 2014, when I discovered Tricia Miranda, LA-based choreographer for stars including Beyoncé, Rihanna, and Missy Elliott. I took one hip hop dance class in Boston and can barely shake it in salsa or bachata outings (#cudjatellimwhite), but that doesn’t seem to matter when I tune in on the newest gorgeous turnout by Lia Kim, Kyle Hanagami, or newcomers like Phil Wright. Most of the videos I watch (with the exception of Kim, who I believe is based in South Korea) are filmed at Millennium Dance Complex in LA. The dancers crush it in groups to the latest hits and encompass all bodies, all types, all interpretations of power and being. To say it embraces “diversity” is frankly a total disservice. It’s not about diversity. It’s about f**k yes, here it is, sit your a** down and watch this because any story you were telling about me before I started dancing is officially beat. Women stride and pop and lock, men wreath their limbs like snakes, heavy girls destroy it, skinny players jump in and get huge. It’s about owning that stage, that camera’s eye, and doing this in my way now, probably never the same, so know me the way I’m telling you, right now. 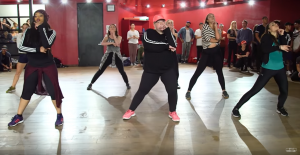 So yes, it is an indulgence. But there’s something bigger happening here, I think, and I want to suggest that we can look at this amazing work with a smarter, sharper lens. I’ve been reading about identity as a form of social performance, especially in the work of Butler, rather than as a fixed category that is applied upon birth. However, nowhere is the fluidity and transversality of Who I Am better enjoyed than in the presence and unfinished breathings of art. When we think about art as a means of rupturing a set of givens in our social realities, what Barone sees as a way of refusing a mandated status quo premised on master narratives, we can see what is possible, we can articulate it using given tools that we bend and bite on to make work for us, in the here and now. We are possible-izing what social scripts want to insist is impossible, we are making reality, bringing past presences and future openings into a unity drifting and glorious and indeterminate. Something about dance, too, adds the component of sociocultural thinking which says we can’t do this alone because there is no “we” in solitude, I am not seen nor see without the rest of us and me together, using these tools and making something new together.

See the first performance (0:00-1:29) of Tinashe – Party Favors, choreographed by Tricia Miranda. The space this dancer, Diana, occupies, exudes ownership as she makes choices and employs a language that is fully hers. She is strong, baseball-capped, sharp-jawed, clad in black, dredded, tattooed, long-nailed, maroon-lipped, mid-driff-showing, reaching, stabbing, controlled, snaky, masculine, feminine, other-ine. She is a woman of color and urban, but even in this space there is something that luminesces beyond those terms. What and how she disrupts what is expected embodies a rising to a different level of aesthetics, where unity itself is only possible through fragmentation and reconstitution. The only way to know her is to watch, again and again, to see her meanings. I highly recommend doing so.