At a graduate student conference called Radical Democracy at The New School a couple of weeks ago, I attended a panel in which several students discussed art and artists who sought to disrupt the status quo about how information is shared and important social issues are discussed among the people of any society. Institutionalized processes of dissemination and control of discourse can constrain access, as well as the range of response, to these issues, making it a less a representation of all voices in the community and more inclusion by selective bias (which tends to benefit those closer to centers of power.

The artwork presented by one of the students in the panel offered an alternative vision. Pasha Cas, a brilliant young Kazakh student who has been creating public art in postsocialist Kazakhstan since he was 16 years old, calls himself a “street artist” and engages passersby with important social issues like nuclear waste, international conflict, and human alienation and loneliness in new forms of capitalist labor arrangement and extraction in the 21st century. The goal: to disrupt the ways in which people access such debates — which influence each and every one of us — and to generate public discourses that are fresh, dynamic, and immediate at the visual level of the passersby. Such an approach abdicates the power of intellectual and art-world elites to control the narrative and determine the direction and scope of public engagement with our daily struggles in shared spaces. This is activist in its generation of public space at a time when we are atomized by exhausting work schedules and other experiences of isolation, suspicion, and fear. He thrills us by asking, “Who are you?” in his latest video (link here), a quesitons that seems too rarely asked in a world that appears to be more interested in the individual as consumer and the community as basis for homgenization. 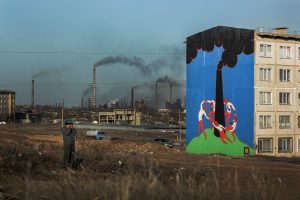 See more examples and a brief interview here. Pasha Cas’s manifest video, «This Is Silence», can be found here.