“A Night at the Garden” is a short film that depicts a pro-Nazi rally at Madison Square Garden in New York City in 1939. Billed as a “pro-American” rally, the images of the columns of white, uniformed men from the ethnic German group called the German American Bund striking drums, carrying swastika-adorned banners, and displaying rows of American flags in front of a cheering, saluting audience are terrifying, to say the least. 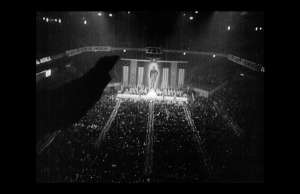 This might like an anachronism in terms, perhaps, of haircuts or police mounted on horseback, or a distant document that should inspire immediate disgust in the 21st-century viewer. Nevertheless, the shock it produces also indexes the collective forgetting by an America that sees itself as a cultural leader in a globalized world, always moving forward in postures of innovation and newness, in denial of much of the anti-Semitism and white supremacy that has underpinned our country’s history.

The final image of the film: 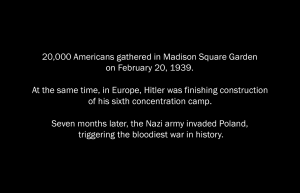 As a testimony to the fact that such thinking is not so far away from the realm of possibility, one need only look at the rise of the right wing in Europe, most recently with the election of Austria’s newest prime minister, Sebastian Kurz, whose People’s Party is likely to build a coalition government by allying itself with the former Nazi-affiliated Freedom Party in that country. And if that seems too far away, too foreign to our own experience of life here, there has been a rise not only of right-wing activism (as we’re all well aware of in the infamous and deadly Unite the Right demonstrations in Charlottesville, Virginia in August 2017) but also in less visible locations. Recently, Bard College, a small, private college in New York, hosted a conference entitled “Crises in Democracy: Thinking in Dark Times.” One of their speakers: a representative of Alternative for Germany, a far-right anti-immigrant nationalist party from that country. It could be inferred that his invitation represented an ethic of free speech, of seeking a balanced approach to the conversation.

Yet when I asked a colleague in attendance whether anyone protested his being there, or even asked a question to challenge his ideas, the answer was “no.” Was this politeness, a commitment to hearing all sides…or a quiet addition to the rising normalcy of violent nationalism percolating in the world nowadays?